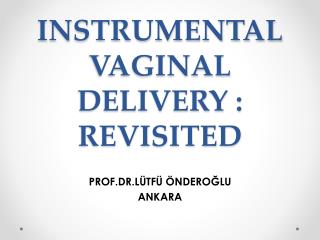 Towards safe practice in instrumental vaginal delivery - . leroy edozien. approximately 1 in 10 deliveries is

Normal labor and delivery - 2. objectives at the end of session, the student is able to. diagnose true labor describe

The Preterm Breech Vaginal Versus. Abdominal Delivery - Introduction. the literature on this subject shows varied

Analgesia for Labor and Vaginal Delivery - . hirmanpour a . md . pain perception by the parturient is a dynamic process