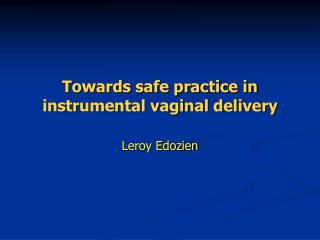 Towards safe practice in instrumental vaginal delivery - . leroy edozien. approximately 1 in 10 deliveries is

Analgesia for Labor and Vaginal Delivery - . hirmanpour a . md . pain perception by the parturient is a dynamic process

Safe Practice in Power Distribution - . swapan dasgupta, ceo, cesu. scope of the presentation. why the subject is

SAFE ANAESTHESIA PRACTICE - . dr.j.edward johnson. what do you mean by that ?. safety of the anaesthetist ? safety of the

Epidural and subdural Hematomas - . epidural hematoma. bleeding between the dura and the cranial bones arterial bleeding