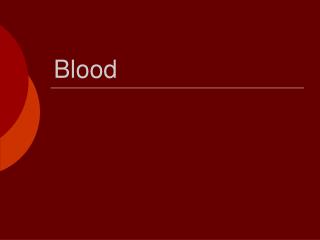 Blood. Introduction. Blood, a type of connective tissue, is a complex mixture of cells, chemicals, and fluid. Blood transports substances throughout the body, and helps to maintain a stable internal environment. The blood includes red blood cells, white blood cells, platelets, and plasma. BLOOD, BLOOD COMPONENTS AND BLOOD PRODUCTS - . most blood collected from donors is processed as follows: ■ blood

Blood - Anp 128 1. what are the major functions of blood? 2. describe how the structure of red blood cells is helpful in

Blood - . 17. overview of blood circulation. blood leaves the heart via arteries that branch repeatedly until they become

BLOOD - . human biology 11. blood. carries the necessities of life to the cells and takes waste from the cells what are

Blood - . helena tome. composition of blood. the top layer is the plasma. the blood plasma acts as the medium where many

Blood - . honors anatomy &amp; physiology. do now: what do the red and white stripes of a barbershop pole

Blood - . clicker review. blood is composed of…. plasma serum formed elements all of the above a and c only. plasma is

Blood - . by the end of the lesson you should be able to: state the composition of blood state the function of red blood