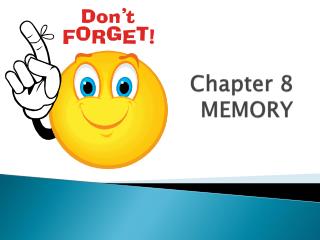 Chapter 8 MEMORY. possible positive characteristic of no memory. No painful recollections so they won’t have anger. MEMORY. Persistence of learning over time through the storage and retrieval of information. David Myers father and son. Chapter 8: Memory - . what’s it for? remembering and forgetting. remembering over the short term storing information

Chapter 8: Main Memory - . adapted to cop4610 by robert van engelen. background. program must be brought (from disk) into

Chapter 8 Virtual Memory - . virtual memory is a storage allocation scheme in which secondary memory can be addressed as

Chapter 8: Memory Management - . a program may not be executed until it is; associated with a process brought into memory

Chapter 8: Main Memory - . background. program must be brought (from disk) into memory and placed within a process

Chapter 7: Human Memory - . human memory: basic questions. how does information get into memory? how is information