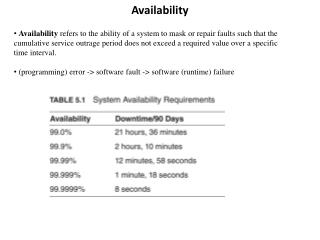 Availability. Availability refers to the ability of a system to mask or repair faults such that the cumulative service outrage period does not exceed a required value over a specific time interval. (programming) error -> software fault -> software (runtime) failure . Availability.