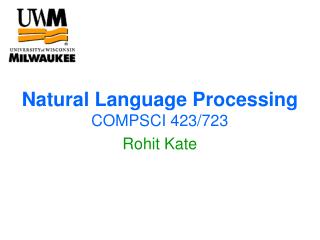 Unsupervised learning of natural language morphology - . john goldsmith university of chicago may 2005. the goal is to

Building Natural Language Generation Systems - . robert dale and ehud reiter. what this tutorial is about. the design and

“The Story of an Hour” by Kate Chopin - . skills: annotation, close reading, writing a thesis. annotation. read the