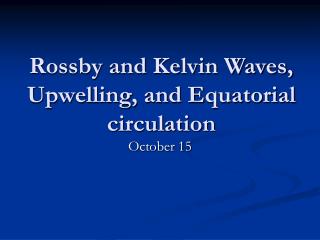 Rossby and Kelvin Waves, Upwelling, and Equatorial circulation. October 15. Rossby Waves. L: measure of length over which U changes; also a measure of how far parcel travels before acted on by Coriolis. If R 0 <<1, ocean responds by wave propagation. f 3. f 2. f 1. C. Mechanical Waves - . ch 21-23. waves. a wave is a disturbance in a medium which carries energy from one point to