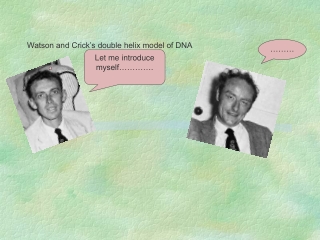 ………. Let me introduce myself…………. Watson and Crick’s double helix model of DNA. Ch. 16 The Molecular Basis of Inheritance - . dna is the genetic material. experiments with bacteria and with phages

DNA Replication - . double helix structure of dna. “it has not escaped our notice that the specific pairing we have

DNA Replication - . 1953 article in nature. watson and crick. double helix structure of dna. “it has not escaped our