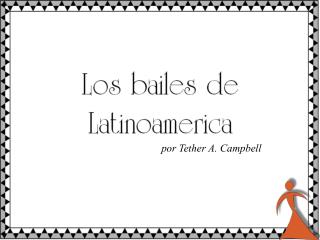 por Tether A. Campbell. LATIN AMERICAN DANCES : These are essentially divided into two categories: The authentic, traditional dances that fall lately into the domain of the folkloric, many of these dances vary from region-to-region, and generally involve a rhythmic character