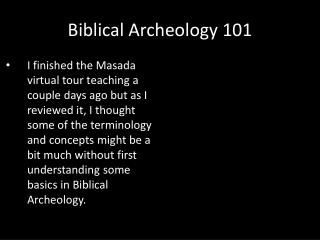 I finished the Masada virtual tour teaching a couple days ago but as I reviewed it, I thought some of the terminology and concepts might be a bit much without first understanding some basics in Biblical Archeology. Biblical Archeology 101. Biblical Archeology 101 Review - Quick review… last time we went over some of the differences between archeology,

Biblical ARCHEOLOGY - Biblical backgrounds. biblical archeology. all scripture is god-breathed and is useful for

Archeology - . chris meagher. why archeology. i have been working on archeological digs for many years. people don’t

Archeology - . can also be spelled: archaeology. what is archeology?. sub field of cultural anthropology sometimes kept

Agile Archeology - . recall: we discussed agile…. now the unified process and uml and …. the complementary

Agile Archeology - . 1. introduction. agile principles did not all come from a single source. arose from many - each from

Biblical - . what is your world view? where did the world come from? – origin what went/is wrong with the world? –

BIBLICAL - . counseling. help and hope from the word of god. biblical counseling …. “a conversation with a friend