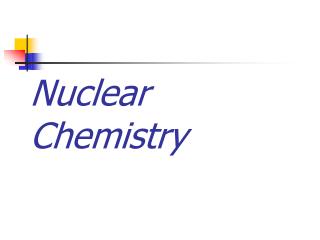 Nuclear Chemistry. The Discovery of Radiation. Nuclear reactions are different from other types of reactions. Nuclear chemistry is concerned with the structure of atomic nuclei and the changes they undergo. Wilhelm Roentgen discovered x-rays in 1895. NUCLEAR MAGNETIC RESONANCE - . nuclear magnetic resonance (nmr) is the spectroscopic study of the magnetic properties of

Chapter 25 Nuclear Chemistry - . 25.4 radiation in your life. chemistry. today we are learning to:- 1. identify 3 devices

Chapter 8 Nuclear Chemistry - . radiation. the emission of energetic particles the study of it and the processes that