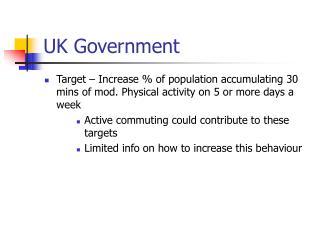 UK Government. Target – Increase % of population accumulating 30 mins of mod. Physical activity on 5 or more days a week Active commuting could contribute to these targets Limited info on how to increase this behaviour. Transtheoretical Model- 4 Core constructs. Stages of Change UK Government and GEOSHARE - . presented by : on behalf of elisavet kitou - defra date : 10 september 2014. why we are

Government and the UK Economy - . ocr gcse a293. starter: think of three words that you would use when talking about the

Levels of Government in the UK - . learning outcomes: know what the different levels of government are in the uk begin to

UK Business and Government Latest News - On the grill providing a news related to the uk government warns, published

LOCAL GOVERNMENT PAY ACROSS THE UK - . njc and sjc douglas black and heather wakefield. why this presentation?. set

Mobility in the UK Government Statistical Service - . anne foulger. introduction. statisticians work in ons and other