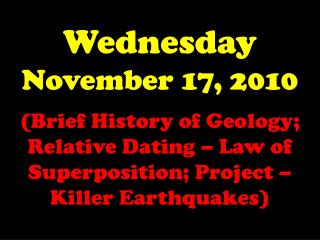 WEDNESDAY, NOVEMBER 20 TH - Your goal for today: i can assist another student with their work in ocis. in addition: i

Wednesday, Oct. 17 - . get out your spiral and put your binder on the floor 2. update your table of contents if you did

Wednesday, November 12th - . a pilot in an airplane of altitude 12km sees two towers directly in front of the plane. the

17 November 2010 - . diffusion role of veins blood volume and blood pressure the baroreceptor reflex the response to

Wednesday, November 28th - . how many people are in the united states illegally? what should happen to those people? what

November 17, 2010 - . write your homework in your agenda: open your agenda to your behavior card. conversions. being able

Wednesday – November 7 - . review exam on friday. review. you are allowed on flash card. i will not provide formulas.