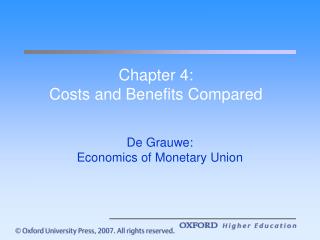 Decision making: Relevant Costs and Benefits - . we need a particular component for our manufacturing process. do you

The Benefits Determination Process - Chapter. 12. the benefits determination process. what are employee

Standard Costs - . chapter ten. learning objectives. after studying this chapter, you should be able to:. 1. explain