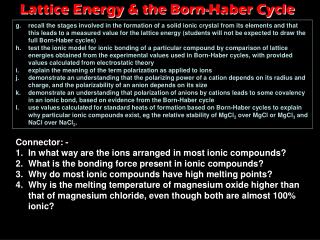 g. recall the stages involved in the formation of a solid ionic crystal from its elements and that this leads to a measured value for the lattice energy (students will not be expected to draw the full Born-Haber cycles) Lattice Vibrations, Part I - . solid state physics 355. introduction. unlike the static lattice model , which deals with

Why do molecules form the way they do? - . bond enthalpies, hess’ law, the born-haber cycle, and heats of reaction.

Lattice Calculation: Caveats and Challenges - . what lattice can and cannot do caveats of calculating meson masses