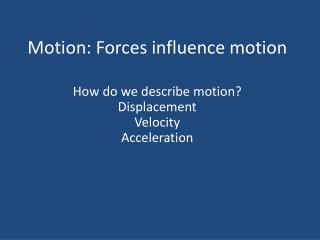 Motion: Forces influence motion. How do we describe motion? Displacement Velocity Acceleration. Position & Displacement. The position ( r ) of an object describes its location relative to some origin or other reference point. Forces and Newton’s Laws of Motion - . force … a push or a pull. force is not a thing in itself, but rather an

Objective 5 - . the student will demonstrate an understanding of motion, forces and energy. 4. science concept integrated