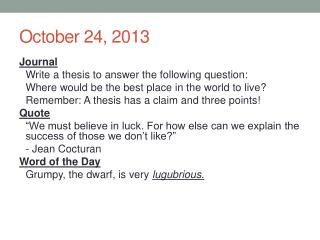 October 24, 2013. Journal Write a thesis to answer the following question: Where would be the best place in the world to live? Remember: A thesis has a claim and three points! Quote “We must believe in luck. For how else can we explain the success of those we don’t like?” Agenda: October 24 , 2013 - Lesson eq: (copy into interactive notebook) why were the american colonists unhappy with the

Date: Thursday, October 24 th , 2013 - The iowa section of the american society of agricultural and biological engineers.

Miller Brands 24 th October 2013 - . agenda. miller brands – who we are beer market overview how to build a winning