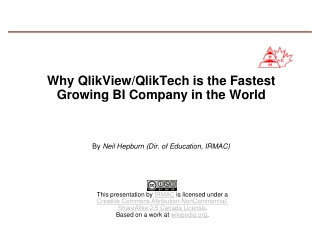 Why QlikView/QlikTech is the Fastest Growing BI Company in the World. By Neil Hepburn (Dir. of Education, IRMAC). This presentation by IRMAC is licensed under a Creative Commons Attribution-NonCommercial-ShareAlike 2.5 Canada License . Based on a work at wikipedia.org. Speaker Bio.