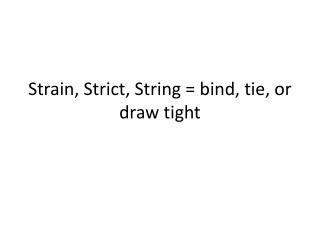 Strain, Strict, String = bind, tie, or draw tight . Astringent . A substance used on skin to make the skin tight . Boa Constrictor . A snake that kills its prey by squeezing it tightly . Constrict . To hold in; to make smaller; to squeeze or bind to make smaller . District . The Urban Game - . 1700. draw a river across the page draw a wooden bridge over the river draw 4 roads originating from

“You cannot bind such on others!” - “when a male causes a female to be with child, he has a duty to her and his

How to construct the draw string bag - . some things you’ll need to make a bag. step 1. joining the two sections