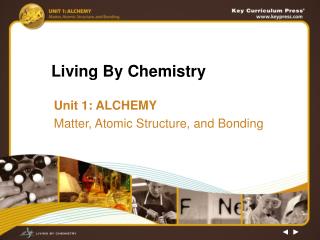 Living By Chemistry. Unit 1: ALCHEMY Matter, Atomic Structure, and Bonding. In this unit you will learn:. what matter is composed of to use the language of chemistry to decode information contained in the periodic table how new substances with new properties are made

Chemistry Overview - ... of chemistry. what does ... and complex chemistry of. living organisms ... physical organic

ORGANIC CHEMISTRY - Many molecules important to living organisms some are quite small----&gt; water many important

Chemistry 1.1 - . chemistry. 1.1. the galileo spacecraft was placed in orbit around jupiter to collect data about the

Pharmaceutical Medicinal Chemistry-1 - . dr. bilal al- jaidi. medicinal chemistry. is the science that deals with the

The Chemistry of Life - . why are we studying chemistry?. chemistry is the foundation of biology. the world of elements.

Organic Chemistry - . chapter 20. what is organic chemistry?. the name implies that it is the chemistry of living things

Chapter 1 LIVING IN A WORLD OF CHEMISTRY - . by the end of the chapter, you will recognize that chemistry is the study of

CH.4: CARBON CHEMISTRY - . water required for life as the medium for all the reactions actual chemistry of living

Chemistry of Life - . the basics of chemistry. matter is recycled and rearranged for living organisms. living matter is

„ The und is covered life is not worth for living !“ - . socrates. brno university of technology faculty of chemistry