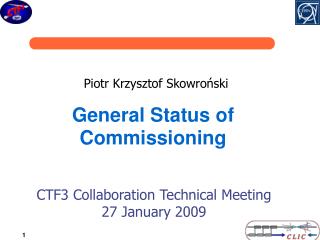 General Status of Commissioning. Piotr Krzysztof Skowroński. CTF3 Collaboration Technical Meeting 27 January 200 9. Commissioning. Proving that machine is technically operational and the beam is as we want it to be Outline Status year ago Operations and machine setup Activities in 2008 Commissioning Status &amp; Plans - . what have we been doing? what is the status? what are the goals for the next few

Status of the Commissioning of the ILA - . presented by f. durodi é 4-jul-2008. remarks. contribution of many colleagues