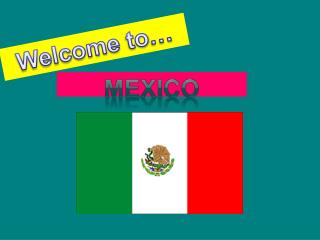 Welcome to …. MEXICO. Let`s start with the flag!. In the centre of the flag there is an image of an eagle, on top of a nopal (type of cactus), eating a serpent. Flag Etiquette - . rules for the american flag. the flag should be raised and lowered by hand. the flag is only flown

Italy - . by: kayla murray. flag. the italy flag was officially adopted on january 21, 1919. the national flag is a

Flag Etiquette and Customs - . objectives. following completion of this session you will be able to: understand the

Movement that Heyday : The of Pan-Arabism : Not the same as - ; pan- arabists are muslim personally, but their part of

Lets start with a new symbol - . q . q is for “heat” measured in joules. heat is a form of energy. james prescott

Blue Flag Award - . all blue flag beaches have a flag similar to this one flying during the bathing season june to