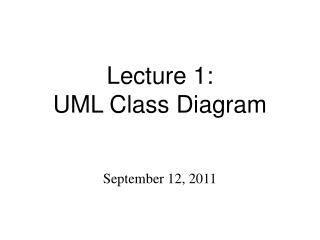 Lecture 1: UML Class Diagram. September 12, 2011. What is a Class Diagram?. A class diagram describes the types of objects in the system and the various kinds of static relationships that exist among them. A graphical representation of a static view on declarative static elements. Plato’s ‘Lambda’ Diagram from the Timaeus - On a class of locally symmetric sequences: the right infinite word Λ