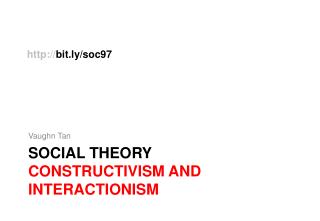 http:// bit.ly/soc97. Vaughn Tan. SOCIAL THEORY constructivism and interactionism. W hat does constructivism say about people's motivations for action?  W hat do the readings say about where systems of meaning come from? INFORMATION THEORY - . communication theory deals with systems for transmitting information from one point to another.

UNIT I: Theory of the Consumer - . introduction: what is microeconomics? theory of the consumer individual &amp;

Social Psychology - . content as per college board 8-10%. what is social psychology?. reading . kurt lewin. the father of