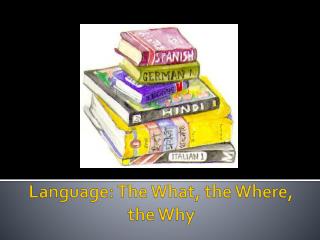 Language: The What, the Where, the Why. What is a language?. Definition (De Blij , 2009): A set of sounds and symbols that is used for communication . When do you know you have a language? Good question. Linguists (people who study languages) debate this a lot, but a good rule is ‘The What, Why, Where and How of Greenwashing - . presented by daragh anglim realeyes sustainability ltd. what is

Scotland: The Who, What, When Where and Why? - . an introduction to the study of philosophy and the use of philosophical

The WHAT? WHY? and HOW? of Language Learning - . what is a foreign or world language?

The who, what, where, when, why and how presentation - . march 2009. introduction: who are we?. dan weaver chairperson of

Why Learn the German Language - You can get a myriad of benefits in your life by learning the german language. these

The WHO, WHAT, WHEN, WHERE and WHY of Christianity - . purpose: if someone doesn’t learn anything else about

What, Who, Where and Why of the Subprime Crisis - . by: ken cyree, university of mississippi presented to carroll

The Essay: The What and the Why - . “what do you think about school uniforms?”. what vs. why identification vs.

The What the Why &amp; the How - . a destination or a journey?. we are from allah, and to him shall we return. surah

Earthquakes in the Ocean: Where, Why, and What Happens? - . prof. julia morgan dr. meghan miller department of earth

Where, Why and What? - . terms used to describe direction and surface. planes imaginary lines that are used descriptively

Measurement: the why, the what, and the how - . paula griswold, mph executive director massachusetts coalition for the

Assessment Results: The Who, the What, the Where and the How - . bric las positas rob johnstone, bob gabriner, greg

Student Learning Targets The Who, What, Where, When &amp; Why - . accountability, assessment &amp; evaluation