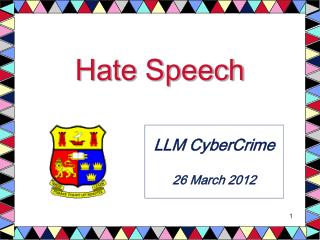 Hate Speech - . cross burning. introduced by william j. simmons in 1915 used by the kkk to create terror the klan burnt

Hate Groups/Speech/Crimes - . the westboro baptist church are notorious for their racy signs and their picketing at the

Attitudes towards the hate speech in Poland - . results of empirical survey conducted by the warsaw university centre for