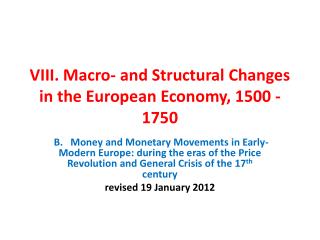 VIII. Macro- and Structural Changes in the European Economy, 1500 - 1750. B. Money and Monetary Movements in Early-Modern Europe: during the eras of the Price Revolution and General Crisis of the 17 th century revised 19 January 2012. Programming with Macros on the Haas CNC - 2. i. goals of this class. understand the differences between a macro and a

chapter 4: structural realism by john j. mearsheimer - Learning outcomes. after this lecture you should be able to:know

Imperialism - . essential questions: how did people in africa and asia respond to western imperialism? how did