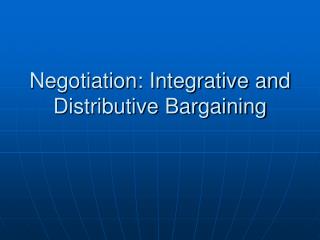 Negotiation: Integrative and Distributive Bargaining. Negotiation is an interpersonal decision-making process by which two or more people agree how to allocate scarce resources Two Main Types of Negotiation: Chapter 14 - . understanding labor relations and collective bargaining. a union is an organization of workers, acting

Instructions for the car negotiation exercise - . this exercise is basically a role play where one participant will play

Research Title: The Negotiation of Meaning in the Talking Circle in the Tertiary ESL Context - . presenter: leonora l.

What You Need to Know About Cultivating Healthy Habits and Getting Fit? - An integrative coach derek opperman is best

Negotiation Rex Mitchell Fall 2011 - . negotiation. conferring with another so as to arrive at the settlement of some

“A Behavioral Theory of Labor Negotiations” Walton and McKersie - . advanced the proposition that the process of

Barriers to Negotiation - 2. common barriers. many barriers exist that can hinder the progress of a negotiation and