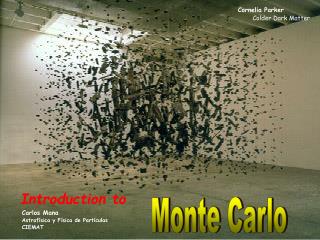 Cornelia Parker - . &quot;i resurrect things that have been killed off... my work is all about the potential of

DARK MATTER - . a presentation by: amanda bentley-de sousa, jessica chang and rebecca martinho. what is dark

Dark Matter - . zwicky’s coma. in 1933 fred zwicky measured the speed of coma cluster galaxies. too fast for the

Dark Matter - . cannot be seen directly with telescopes; it neither emits nor absorbs light; estimated to constitute

Dark Matter - . the portion of the universe you have to appreciate to “see”. by andre bosman and barbara anderson.

Dark Energy and Dark Matter - . dark energy is the dominant constituent of the universe dark matter is next 95% of the

Dark Matter and Dark Energy - . on the frontier of cosmology…. dark matter. many lines of evidence support the big bang