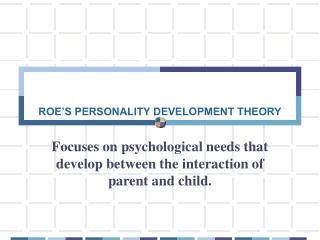 ROE’S PERSONALITY DEVELOPMENT THEORY. Focuses on psychological needs that develop between the interaction of parent and child. Ann Roe. The theory predicts occupational selection based on individual differences, which are biological, sociological, and psychological. PSYCHOLOGY - Personality. how do psychologists define and use the concept of personality?what do the theories of freud

Theory ( TMT ) - Terror management. theory ( tmt ). how the fear of death fundamentally influences the development of

Chapter 11: Personality - . dr. m. davis-brantley. what is personality?. personality an individual’s unique and

Mediation and Moderation as Tools for Theory Development in Social and Personality Psychology - . a symposium spsp 2010.

Personality Theory - . to begin with, here are your chapter projects. yes that is a plural! hooah!!!. go to the following

Personality Development - . i. approaches to studying personality. psychoanalytic – (freud) focuses on the child

Humanistic Personality Theory - . people are a “genetic blueprint, to which substance is added as life progresses”

How is Personality measured? - . unit 1 – making sense of other people. topic 3 – development of personality. lesson

Personality - . essential questions:. what is a personality? is our personality encoded or learned? does it ever change?

Personality - . almost everyone has one…. definition. “ the organization of enduring behavior patterns that often