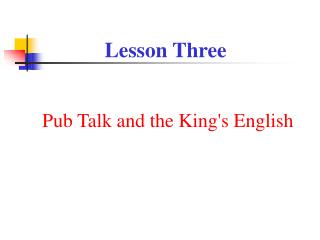 Lesson Three. Pub Talk and the King's English. Aims. To learn the methods in developing an expository writing,esp. the use of examples To know how to make good conversation To trace the history of the King’s English To analyse the features of spoken English

Lesson Three: - . comparing solids: roll or stack. think and wonder. what are some things that roll ? describe their

Chapter Three, Lesson Three: Early Islam - . the death of muhammad and its consequences. what happened when muhammad died

Lesson Three - . pub talk and the king's english. objectives of teaching. to comprehend the whole text to lean and master

Lesson Three Vocabulary Words - . story: my librarian is a camel. isolated. to keep apart from others. the sick boy was

Unit Three - Lesson 17 - . how the civil war tested and transformed the american constitutional system. how did

Unit Three – Lesson 19 - . how has the equal protection clause of the 14 th amendment changed the constitution?. what

LESSON TWENTY-THREE: RHOMBI APOCALYPSE!!! - . rhombi and squares. so right now we have discussed the definition and

Lesson Three - . english i. beget. definition. example. (v) to produce; to be the parent of. hatred begets more hatred.

Unit Three Lesson 20 - . how has the right to vote been expanded since the adoption of the constitution?. bill of rights

Unit Three: Lesson 18 - . how has the due process clause of the 14 th amendment changed the constitution?. essays for