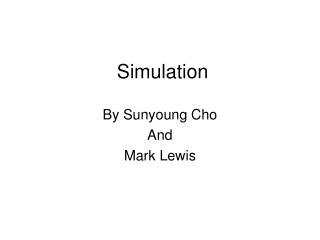 Simulation. By Sunyoung Cho And Mark Lewis. What is Simulation. Simulation – “A way to reproduce the conditions of a situation, as by means of a model, for study or testing or training, etc.” – Oxford American Dictionary (1980) Simulation - . introduction (1 of 3). the best advice to those about to embark on a very large simulation is often the

Simulation - . a queuing simulation. example. the arrival pattern to a bank is not poisson there are three clerks with

SIMULATION - . anh duy tran 11c. introduction. simulation is the imitation of some real thing, state of affairs, or

Simulation - . continuous variables. 0. 1. distributions . variables to be simulated may be normal (e.g. height) or

Simulation - . drought brings water shortage to navajo mountain. it hadn’t rain for over for over nine months here in

Simulation - . objective: to study and understand complex systems. a system is a collection of items from a

Simulation - . continuous variables. 0. 1. distributions . variables to be simulated may be normal (e.g. height)

Simulation - . an example. a garage hires out cars. it currently owns four cars which are hired out on a daily basis