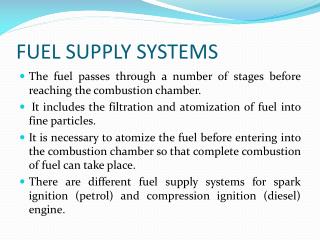 FUEL SUPPLY SYSTEMS. The fuel passes through a number of stages before reaching the combustion chamber. It includes the filtration and atomization of fuel into fine particles. FUNDAMENTALS OF FUEL SYSTEMS - . topic 1. objectives. student should be able to: so 1.1 explain petrolas an automotive

Fuels And Fuel Systems - . fuel: the energy source for the combustion processcombustion occurs when fuel comes into