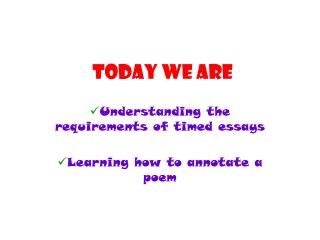 Today we are. Understanding the requirements of timed essays Learning how to annotate a poem. TIMED ESSAYS. In the exam you will have to write an essay under timed conditions You will be given a range of questions to choose from, seperated into different categories: HLA : Where We Are Today - . warren miller technology showcase 2007 15 march 2007. enhanced science value from the hst

What Are We Doing Today? - . what is innovation why is it important think differently about your audience where do good

Today We Are Going to… - . discuss the difference between a crisis and an emergency explain the mot’s crisis

Where are we going today? - . trends in connecticut’s residential markets. what is a constant quality price index? why

What are we studying today? - . symbol. what is a symbol ?. a symbol is a concrete object that represents, stands for, or

What Are We Learning Today? - . 1.4 explore ways in which individuals and collectives express identities. who are

What are we Identifying today? - . use common roots and affixes when attached to known vocabulary. discuss with your

Why are we here today? - . june is open enrollment for all benefits: health dental vision long term disability optional

What are we learning today? - Learning objective : use underlining , “quotations”, or italics to identify titles of

Why are we here today? - . to positively impact the lives of 500 u.s. military veterans in florida. why these veterans

Why are we here today? - Today’s event will be part of a series of engagement that informs our business plan from 2012

What are we doing Today? - . find these literary devices . fractions . fr= first reading. the speaker seems to be giving

What are we learning today? - . why?. ‘what is important is that there is a level of engagement with the learning

What are we doing today? - . log on at your assigned workstation. go to the journalism website/agenda and log on to the

Today we are learning to: - . represent “what we can imagine” about the micro-world based on “what we can see” in