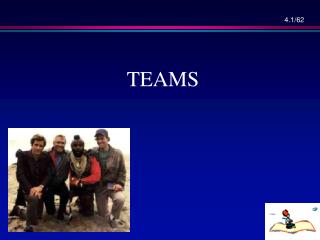 Teams - . at partnering with families and closing the achievement gap may 26, 2004 seattle, washington presented by

TEAMS - . introduction terminology of teams, groups, collection of people how to select and use teams for qi attributes

Teams - . xiaojun qi. team organization. suppose that a product can be accomplished by 1 person-year of programming. if