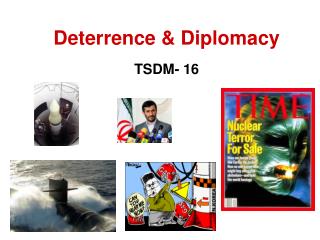 Deterrence & Diplomacy. TSDM- 16. Strategy and Deterrence. “U.S. forces must be able to deter, defend against, and defeat aggression by potentially hostile nation-states.” 2010 QDR “Preventing wars is as important as winning them.” 2011 NMS. Strategic Deterrence. Deterrence – or Destruction? - . comparative nuclear doctrine. i. modern deterrence theory. the cult of the bomber,

Take out study guide for stamp - What will we learn today? 11.4 students trace the rise of the us to its role as a world

CCTV 101 - Infinova. cctv 101. what is cctv? . what is the purpose of cctv? cctv (closed circuit television) is a system