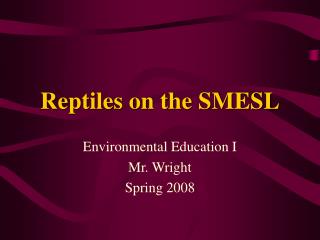 Painted turtles - . by jayden beach. animal classifications. there are five different groups of animals with vertebrates.

Marine REPTILES - . sea snakes. present-day diversity of marine reptiles in the seas is low. one reason for this appears

Cold blooded critters - . care and maintenance of reptiles and amphibians in laboratory settings. meet the critters.

Reptiles Are The New Pets - . reptiles are easily available reptiles have personalities they have many advantages

Marine Reptiles - . reptiles. first to move to land then some came back to water 4 orders: snakes &amp; lizards

Reptiles: The First Amniotes - . amniotic egg. have embryonic membranes that protect the embryo from desiccation, cushion

REPTILES - . what is a reptile?. snakes, turtles, alligators, and lizards are considered reptiles. reptiles have scaly