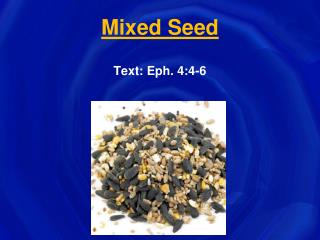 Seed Plants - . review…. a green alga is the most likely ancestor to land plants imagine life in a shallow,

Seed Storage - . anthony re, kevin zeng. objectives statement. families in honduras do not ha ve seeds for their own

Seed Dormancies - . plant propagation. seed terminology. viable: the seed has a “living” embryo and is capable of

Seed Plants - . seed plants are divided into two groups:. 1. gymnosperms – which bear their seeds directly on the

Seed Plants - . two groups of seed plants: gymnosperms angiosperms gymnosperms include the conifers and cycads and this

Seed Drill - Developed by jethro tull. created in 1701. plants seeds in straight line. made less work for farmers when

Seed Dispersal - . what are the five ways that seeds can be spread from the parent plant?. seed dispersal. wind water