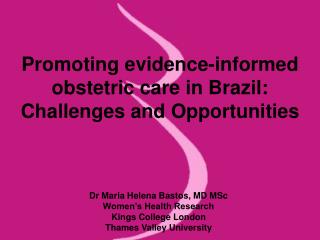 Introduction to Evidence-Based Health Care and the Systematic Review of Evidence - . jbi/csrtp/2012-13/0001 . jbi-csr

Evidence-Based Practices for Promoting the Literacy Development of Infants, Toddlers, and Preschoolers with Families Ho

OBSTETRIC EMERGENCIES - Overview:. obstetric emergencies - cause damage and death to mothers and babies. they require

Introduction to Evidence-Based Health Care and the Systematic Review of Evidence - . over view. evidence based health

Trauma Informed CARE and Practice - . a workshop for service organizations and providers to learn about trauma-informed

Behavioral and Educational Challenges - Behavior and education challenges: trust and privacy it is hard to change