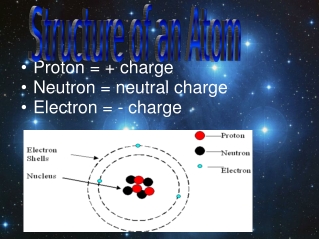 Proton = + charge Neutron = neutral charge Electron = - charge. Ions. Ions are atoms that have lost or gained one or more electrons giving them a positive or negative charge!. If an ion gains an electron it has a negative charge. BASIC ELECTROCHEMISTRY - . the charge and current. electrochemistry studies the processes which involve charge the charge

7.1 Static Charge - . electrical charge that is collected in one place static charge is often encountered in everyday

Charge (2) - . normally objects around us do not seem to carry a net charge. they have equal amounts of positive and

Formal Charge - . helps us determine the most probable lewis structure when there are several correct possibilities.

Predicting the Charge - . since you canâ€™t tell from the periodic table what the charge is on a transition metal