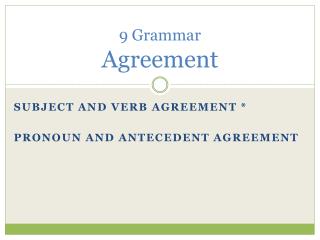 Update from the RIPE NCC - . resource lifecycle management trusted source of data evolving the role of the ripe ncc.

Grammar Workshop - . the writing studio bate 2005. pronoun and antecedent agreement. a pronoun is a word that takes the

Revising Grammar - Grammar. revising grammar. what is grammar?. essentially, grammar is the set of rules used to ensure

Major Grammar Errors - . it is very important that you listen to the audio for this presentation as all of the examples

All the Grammar Rules you need - . :because most of the research shows that you can’t really teach it anyways. why

GRAMMAR GRIND - . subject and verb agreement!. a subject of a sentence is the noun performing the action of the sentence.

YOUR GOAL FOR THE DAY AT CHOMPCHOMP.COM (GRAMMAR BYTES) - . 1 st : exercise 4 under subject-verb agreement (25 questions)

IDB 157 # 2 - . grammar types of grammmar universal grammar s. nalan büyükkantarcıoğlu. what is grammar ?. what is

GRAMMAR - . oh, goody -- grammar. who needs it? students, that's who. as i endlessly sit and correct papers, it is

GRAMMAR FOR READING - . geoff barton sunday, october 12, 2014. www.geoffbarton.co.uk. grammar for reading is … about

Grammar and Usage Lesson #45 CCSS.ELA–LITERACY.L. 1 - Demonstrate command of the conventions of standard english