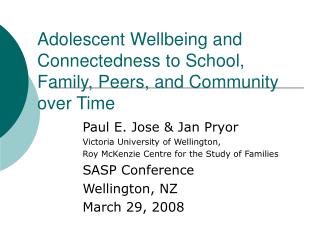 Adolescent Wellbeing and Connectedness to School, Family, Peers, and Community over Time Adolescent Wellbeing and Connectedness to School, Family, Peers, and Community over Time

Family and Community - . within early childhood education. by roseanne pickering – eps 6922 – 2011. importance of

Family and Community Engagement - . webinar 1: a walk through the handbook framing the discussion families and learning.

Family time to relax and play - . october trip to

Impact of the media, peers and family

Community wellbeing and the arts - . the arts include…. music festivals painting digital and multimedia

Fostering School Connectedness Overview - Objectives. after completing this program, the participants will be able