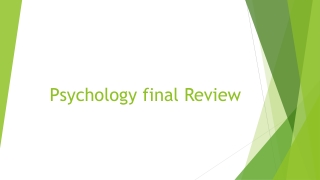 Psychology final Review. Key Points. Classical Conditioning - Learn to associate one stimulus with another Stimulus - Something that produces a reaction Response - a Reaction to a Stimulus Unconditioned Stimulus - A stimulus that causes a response that is automatic, not learned

Psychology Final Exam Review - . use these slides as flashcards to help you study for the big day!!! good luck!!!. unit 1

Psychology Semester 1 Final Review - . two research methods widely used by psychologists are a. precognition and the

Psychology Review - . the unfair game. rules. a prize will be rewarded to students for correctly answering a question

Final Review - . chris and virginia. overview. one big multi-part question. (likely to be on data structures) many small

Final Review - . loan info no localized trendline. suppose your boss gives you a 1% raise while inflation goes up 3%.

Final Review - . what caused the &quot;blacklisting&quot; that cost many film industry workers their jobs in the