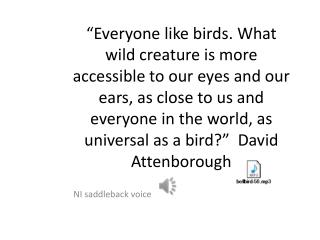 “ Everyone like birds. What wild creature is more accessible to our eyes and our ears, as close to us and everyone in the world, as universal as a bird?” David Attenborough. NI saddleback voice . The decline of the Saddleback STORY . Nationally critical ::: Nationally endangered . Saddleback Dolphins - . by: arianna, chelsie and christian. what does this animal look like?. the saddleback dolphin is a

SADDLEBACK COLLEGE - . the reading program for student success. our mission

SADDLEBACK COLLEGE - . the reading program for student success. our mission

Saddleback College Gauchos Football - . by justin bennett. location. nestled in the foothills of mission viejo in

Saddleback College Registered Nursing Program - . information session. our program and mission. the goal of our program

Online Education at Saddleback College - . presented to the socccd board of trustees june 22, 2009 dean patricia