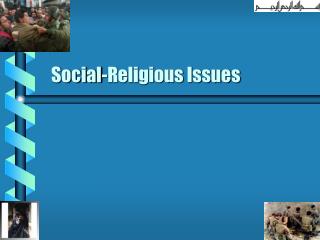 Social-Religious Issues Women In the Qur’an In the Qur’an, Allah warns the people of women Allah also states women in the positive sense Women believe the problem is the interpretation, not in the teachings of Allah Islamic Women

Focus Group: Social-Religious Issues - . islamic fundamentalism. why must we fight? what is this fight about?. jihad an

Religious Issues - . secularism and theocracy. secularism movement away from control of life by a religion

Religious Issues - . secularism and theocracy. secularism movement away from control of life by a religion secularists

SOCIAL RELIGIOUS OF INDIA - . by. mallikeshwari mallika. social and religious

Religious Issues in Public Schools - . answers to the self-test can be found at my web site. religious issues in public

Religious Issues in the Workplace - The way we talk about the world is not merely a rhetorical device. it is creative of

Approaching Social Issues - . trade-offs: an introduction to economic reasoning and social issues by harold winter. the

Illustrate: Social Issues - . what are “social issues”?. wikipedia definitions: matters that can be explained only by

SOCIAL ISSUES : ENVIRONMENT - . a presentation done by : liyana a, liyana k, lindy and freda. what are social issues?.