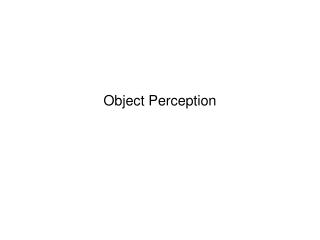 Object Perception. Perceptual Grouping and Gestalt Laws. Law of Similarity. Items that look similar will be perceived as being part of the same form. Law of Good continuation. This is perceived as a square and triangle, not as a combination of strange shapes.

Gestalt Principles of Visual Perception - . gestalt – movement in experimental psychology which began prior to wwi. we

There is More to Perception than Meets the Eye - . about gestalt psychology. gestalt theory. sees the brain as a dynamic

Perception - . rules of perceptual organization. gestalt psychologists the whole is more than the sum of its parts

Perception - . by: alyssa beavers, chris gordon, yelena pham, hannah schulte. to start off…. what is the relationship

Visual Perception – Perceptual Set - . look closely at the illustration of a seal act for a circus in the figure below.

The Expressive Self: Gestalt Psychology, Art and Personality - . aesthetics in the 18 th century. aesthetics: study of