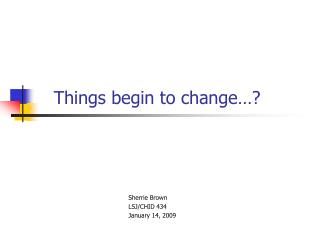 15 Important Lessons I Learned as an SEO Start up - It’s almost 2 years since i officially started seo hacker. i can

Before we begin … - Note : to appreciate this presentation [and insure that it is not a mess ], you need microsoft

Mass - . blessed sacrament altar servers. back. this is a layout of the church. there are some things to note before we

STAGES OF CHANGE MODELS - . behavior change is a natural process that involves passing through a series of stages. agenda

The Serenity Prayer - . god grant me the serenity to accept the things i cannot change; courage to change the things

Look Up for Your Redemption - . and when these things begin to come to pass, then look up, and lift up your heads; for

The More Things Change the Less We Get Paid Medicare Hospital Reimbursement Update - . 2013 spring conference may 17,