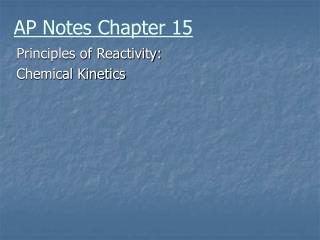 AP Notes Chapter 15. Principles of Reactivity: Chemical Kinetics. Chemical Kinetics The study of how fast chemical reactions occur. How fast species are appearing and disappearing. It has nothing to do with the extent to which a reaction will occur – that is thermodynamics. The Urinary System Chapter 24 – Lecture Notes - . to accompany anatomy and physiology: from science to life textbook

Chapter 8: The Rise of Rome - . in your notes, do a quick-write listing everything you know about ancient rome. think

The Digestive System Chapter 23 – Lecture Notes - . to accompany anatomy and physiology: from science to life

The Endocrine System Chapter 17 – Lecture Notes - . to accompany anatomy and physiology: from science to life