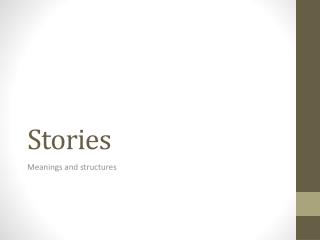 Social Stories - . at school. what is respect?. respect is being careful and thoughtful with other people. teachers and

Life Stories - . what makes a person larger than life?. biography and autobiography. what is a biography? written in

Feature Stories : - . features are told in a less hurried and generally more creative way . the writer chooses a unique

Short Stories - . by: steph martin. edger allan poe. was known as the first american short story writer in the 1800’s

American Stories - . this land is your land, this land is my land. from california. to the new york island,. from the

Social Stories - . social stories do more than just tell the child what to do; they help them see social situations in a

Social Stories - . what is respect?. respect is being careful and thoughtful with other people. teachers and students

My Stories - . by 1cholate5. stories posted. a dream come true the rumor heard around the world gym blackout the chemical

31 heart touching moral stories for children - The young minds of children are easy to mould with good thoughts, good