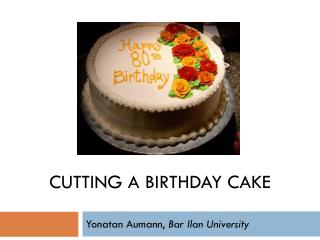 Cutting a Birthday Cake. Yonatan Aumann, Bar Ilan University. How should the cake be divided? . “I love white decorations”. “I want lots of flowers”. “No writing on my piece at all!”. Model. The cake: 1-dimentional the interval [0,1] Valuations: Non atomic measures on [0,1] CAKE CUTTING - . not just a child’s play. how does one fairly divide goods among several people?. what is

Birthday Cake - Resist the temptation if you can! we are sweet life birthday cake in bahrain.come to us for the most

Unicorn Birthday Cake - The unicorn birthday cake looks really amazing. if you are looking for bespoke cakes, then the

Birthday Cake Delivery Making a Massive, Delicious Cake - Cakes are for all big or little activities as they mark the

Shopping For A Custom Birthday Cake - For each year that you reach a birthday, you want to celebrate that you have been

Order Birthday Cake Online - Today it is almost impossible to think of any birthday without a cake. be it the birthday of